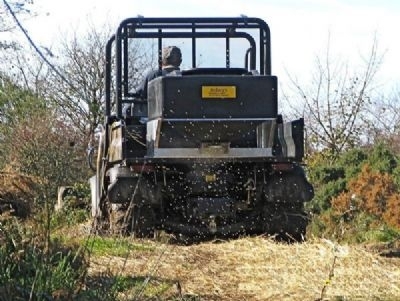 Using automatic feeders can be a fantastic time saving exercise for part-time keepers who need to be in several places at once. Small rough shoots and informal syndicates can get the best out of their ground without the investment of time and effort which was traditionally associated with hand feeding poults at the release stage.

Some of the bigger automatic feeders have large hoppers designed to hold up to 115Kg of wheat or pellets, which is the equivalent of almost five sacks. Fill these feeders up, set the timer and then leave the birds to themselves. The motor will be activated for as long as you choose, and the spinner plate will cast the feed in a broad circle around the hopper, giving the birds a chance to work for their feed. There is the useful option of setting an electronic horn to go off at feed times, which soon becomes a good alternative to the traditional keeper’s whistle and certainly lets birds know what time it is.

These big feeders are also ideally suited for use on wild duck flight ponds. The treated legs allow the hoppers to stand out in shallow water, scattering feed for mallard, wigeon and teal. It’s best to set the timer to scatter feed just before the ducks are due after sunset so that feed doesn’t lie around in the shallows all day attracting moorhens and rats.

Duck usually prefer barley, but you can put most kinds of cereal through the spinner plate depending on what you have access to. It is worth remembering that some kinds of bruised barley or barley tails may end up jamming the mechanism, so make sure your chosen feed is as clean as possible. The same is true of feeds which contain molasses or which have been left in the damp and gone clumpy.

If you find that there is feed left over when the ducks depart in the morning, shorten the feed time until there is nothing on the water except the odd stray feather.

Smaller automatic feeders are supplied in kit-form which you can attach to plastic hoppers or feed bins. These have the advantage of being easy to move around and set up according to where they are most needed, but the function and operation remains much the same. Most DIY kits are powered by a 6v battery which lasts for several weeks before needing to be recharged.

Much is made of the value of ATV feeders,  and it is hard to overstate how useful they can be for keepers who need to cover the ground. ATV feeders are available for all kinds of off-road vehicles, including quads, mules and kubotas. There are even trail feeders which can be attached to the towbar of a quad like a mini trailer.

These feeders certainly make light work of feeding, but they can be limited by safe access. Good tracks and hard ground are a must for ATV feeders, because while a quad will happily tackle even the wildest feed ride on any given day, the ground needs to be firm enough for the same route to be followed day after day in all weathers. This may mean some forward planning is needed before investing in a mobile feeder.

Remember to add a game attractant like aniseed oil to your feed and feed hoppers; it’ll keep birds coming back.

Find the right amount of food for your birds. You don’t want them being over fed and lazy or getting hungry and heading off into the distance.

Spreading too much feed or spreading it in the wrong place can leave food lying for too long and attract rats. Keep an eye on your birds and their feeding habits.